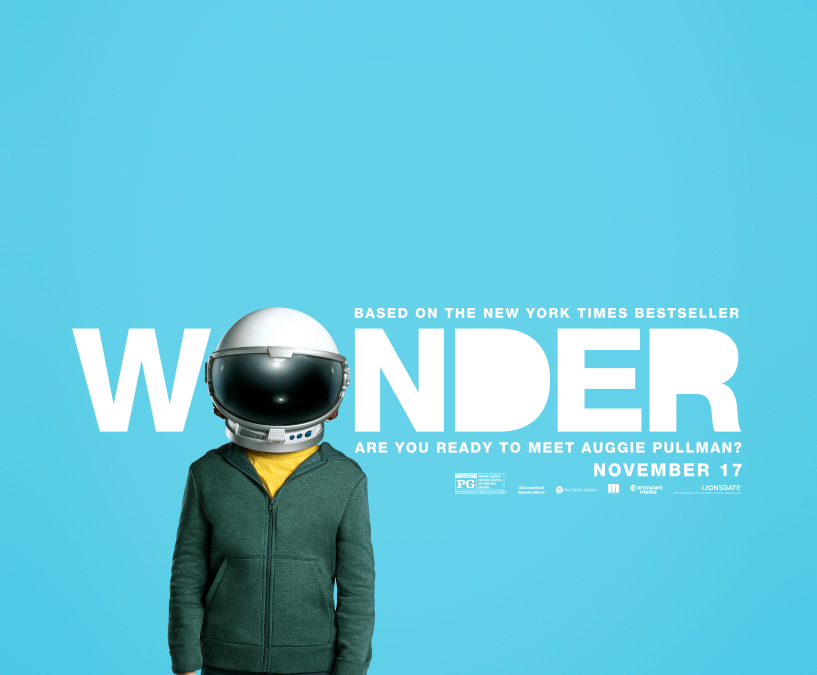 Wonder is the sweet new film from director Stephen Chbosky, based on a novel by R.J. Palacio, that recounts one year in the life of Auggie Pullman as he enters and navigates 5th grade after having been home-schooled up to that point.

Auggie suffers from a rare genetic disease that causes facial deformity, a condition not fully alleviated by multiple surgeries; as a result of his condition, he draws stares wherever he goes and other children taunt him by telling their friends that if they touch him, they’ll get the plague.

Wonder is a charming little film with several nice performances, particularly that of Jacob Tremblay in the title role, Noah Jupe as his friend Jack Will, and Mandy Patinkin as the school’s benevolent headmaster.

This is not to dismiss the good work done by Julia Roberts as Auggie’s mother, though for much of the film, she is mainly called upon to look anxious, worried or sad, but she has one moment that is extremely well done – when she is standing outside the school to pick Auggie up at the end of the day and Auggie comes out with a new friend and asks if he can come over, the range of emotions that cross her face is lovely to see.

One of the two caveats I have about Wonder is the filmmaker’s decision to retain a conceit that is in the book (which I have not read) to periodically switch perspectives and tell the story from the viewpoint of other characters such as Auggie’s sister Olivia, Olivia’s friend Miranda, Jack Will, etc, a decision that for me was distracting. inconsistently applied and didn’t seem to serve any great purpose.

The other is that for some reason, the film switches gears about a third of the way in and spends a great deal of time on a secondary plot dealing with Auggie’s sister and her involvement in her high school drama production – which includes a plot twist that anyone who has ever seen a movie should spot coming a mile away – and, while this secondary plot has some nice moments, it seems to pull us away from Auggie’s story so that when we return to it, there is a sense of starting over.

Still, despite these reservations which, for me, kept Wonder from being an outstanding film, it is a lovely story that never falls into mawkishness (due primarily to the genuine sweetness and humor that Tremblay brings to his performance) and it is a welcome family film that teaches some valuable lessons about kindness and friendship, thus earning six out of my seven run-on sentences.