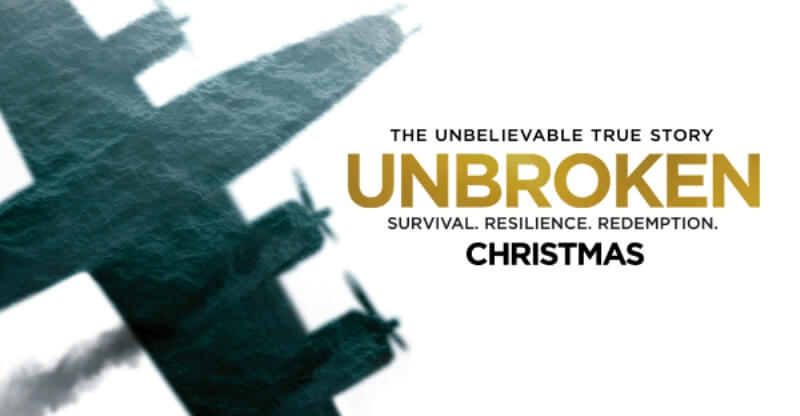 Unbroken, based on the best-selling book by Laura Hillenbrand (a great book that you should read), tells the true story of Louis Zamperini (played by Jack O’Connell), a World War II hero who survived two plane crashes, then survived stranded on a raft in the Pacific for an unheard of 47 days before being “rescued’ by the Japanese, who then imprisoned and tortured him for two years.

The movie isn’t the kind of meaty movie that sticks with you for months on, providing excitement and plot but lacking in deeper character development. Director Angelina Jolie does ok with the subject matter, though overall I think I wanted a grittier film, one with more documentary-like hand held camera shots, more interesting looking actors (instead of good looking actors), and a more palpable fear in battle sequences.

The film glosses over Zamperini’s post-war Christian conversion (though to be fair, it barely comes in at the end of the book), but it would be wrong to assume it is a movie without faith, seen mainly through conversations Zamperini has with his friend Phil (Domhnall Gleeson) and through the prayers of his mother. The penultimate scene of the movie, a test of strength with a giant wooden beam, clearly echoes Christ carrying his cross.

This is a rare film that elicited applause in the theater, which I think was more of a tribute to Zamperini than to the quality of the film (which is very good, though in no small part due to the subject matter).

Unbroken is a good film about a great man, and that, in and of itself, makes it worth seeing.