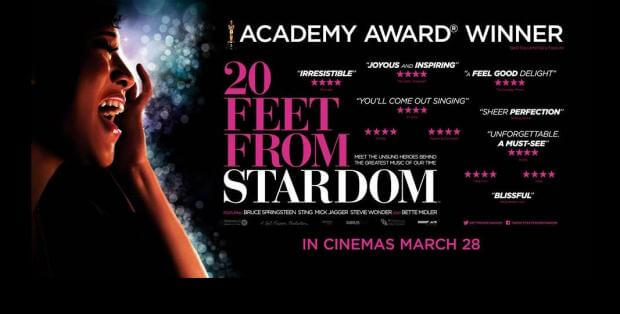 Twenty Feet from Stardom won the 2014 Best Documentary Academy Award, and boy, does it deserve it, as filmmaker Morgan Neville shines a bright spotlight on backup singers, some of the most talented and under-appreciated musicians around.

More historical than contemporary, the film looks primarily at the long careers of some African American women whose voices you’ve heard over and over on some of Motown and Rock and Roll’s greatest hits without ever fully grasping how uniquely talented they are and how important their sound is to the music we all love.

Archival and historical footage blends in with modern day interviews with the singers themselves, producers, historians, and superstars like Mick Jagger, Sting, and Bruce Springsteen (who in particular helps us understand the influence of African American gospel music on Rock and Roll).

With the exception of Judith Hill (a 30-year-old who sang backup for Michael Jackson and performed at his funeral), for most of the film Neville looks back in time at singers who recorded in the 60’s and 70’s, and I wish we could have seen a young singer just starting out today, trying to break into an industry with overwhelming talent.

Neville also unflinchingly explores the mystery of the lack of stardom, the haunt of careers stalled, of fame unrealized, and we realize that success is fickle, that jaw-dropping talent sometimes isn’t enough, that perhaps there’s only room for one Aretha, and that maybe your high school Spanish teacher is actually one of the best studio singers you’ve never heard of.

This movie is such a well-made movie, with wonderful music, editing and filming. But what’s most wonderful about it is the people, these women who have such great spirit and personality, women whom you would do well to get to know, and whose moment in the spotlight has been long overdue.