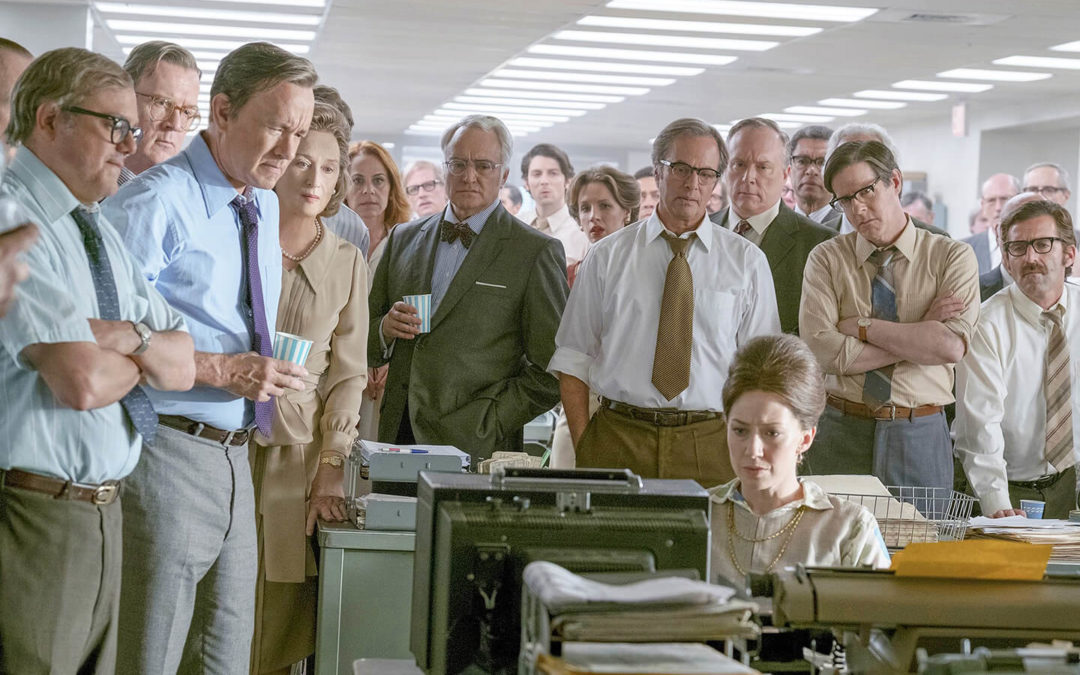 Steven Spielberg’s The Post is a timely and well done look back at the events surrounding the Washington Post’s publication of the Pentagon Papers in 1971, and it does a very good job at capturing the tensions within the hierarchy of the newspaper as Katherine Graham (Meryl Streep) wrestles with the responsibility of running the paper while taking it public as well as the tensions between the press and the Nixon White House.

Spielberg does an excellent job of evoking the look and feel of newsrooms at the time – the typewriters, the typesetting machinery, the pneumatic tubes, etc., as well as the hustle and bustle of getting the paper out on time each day.

The story is a timely one with a distinct resonance for today, with the on-going conflict between the press and the current President, a resonance that can’t be avoided, though at times Spielberg hammers that nail a bit hard (more on that point later).

The performances are generally solid, as Streep does her usual masterful work as she uses her voice, eyes and body to show the pressures she is under while Tom Hanks is good but may have been a bit miscast as Ben Bradlee, as he never quite comes across as the rumpled, hard-charging editor that was portrayed more effectively by Jason Robards Jr. in 1976’s All the President’s Men.

As noted above, the film is a timely one and that timeliness comes across as the story is told, but Spielberg insists on beating the freedom of the press theme to death, which leads to a certain degree of wobbliness near the end of the film when he quits focusing on the story and begins preaching.

This is especially apparent in the Supreme Court portion of the film in the form of a needless, contrived encounter between Graham and a young female intern (which is made possible only by making Graham look silly by not knowing about a separate entrance for litigants) and a howler of a scene when Graham walks out of the court while a crowd of starry-eyed women parts before her like the Red Sea parting before Moses, all the while staring at Graham raptly.

The story of the publication of the Pentagon Papers is solid in its own right and the film tells it well, not needing such scenes as described in the preceding paragraph, as well as one near the end when Meg Greenfield (played by Carrie Coon) stands up in the newsroom and shouts out excerpts from Justice Hugo Black’s decision, since these scenes tend to make us wonder if the filmmaker thinks we didn’t get it.

We did, and The Post gets 5 out of my 7 run-on sentences.