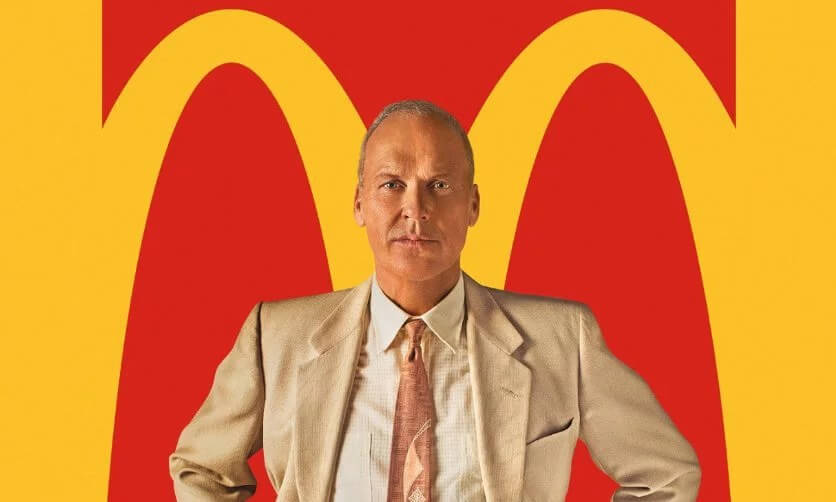 The Founder, the new film from director John Lee Hancock, (The Blind Side, Saving Mr Banks), recounts how Ray Kroc (Michael Keaton) built the McDonalds fast food empire after having essentially stolen the concept from the McDonald brothers Dick and Mac.

The film consists of two quite different halves, held together by the terrific performance of Keaton, who is really the only reason to see it.

The first (better) half is to a large extent a lighthearted romp as it shows us Kroc’s early futile attempts as a salesman and his discovery of the McDonald brothers’ spee-dee system of cooking and serving burgers and fries, a discovery he makes when they order eight of his milkshake machines, an astonishing order when he has had little luck getting most customers to order even one.

Early scenes showing Kroc first sampling the brothers’ food and his awe at the smoothness of their operation are whimsical and entertaining, with a charm and wit that disappears when the film moves into its darker second half as Kroc, having convinced the brothers to franchise their operation, begins to undermine them through legal maneuvering as he essentially takes over the entire chain and even eventually claims the spurious title of Founder.

Holding the film together is the performance of Keaton, who dominates the movie with crackling energy, alternately charming, devious, innocent and ambitious as he moves from frustrated salesman to someone more unpleasant and, at times, cruel in his single-minded pursuit of money and recognition; even in the lighter earlier part of the film, Keaton lets us see the ruthless businessman he will become and he is the glue that makes the film work to the extent that it does.

The film, not authorized by the McDonald’s Corporation, begins with those famous words “based on a true story,” which almost always guarantees that liberties were taken but there is no reason to doubt that it is a fairly accurate account of what transpired.

Despite the good period detail and capable supporting performances by Nick Offerman and John Carroll Lynch as the McDonald brothers, and Laura Dern doing what she can with an underwritten role as Kroc’s first wife, the tonally-dissonant second half, which undermines the good will built up in the first half (as well as being a bit confusing at times in depicting Kroc’s legal mechanisms), combined with a tendency to bring in characters and then drop them with no explanation (a worker by the name of Fred Turner is introduced early and never heard from again, though he apparently was a significant figure in Kroc’s hierarchy according to the closing credits) lead me to give The Founder only 4 of my 7 run-on sentences.