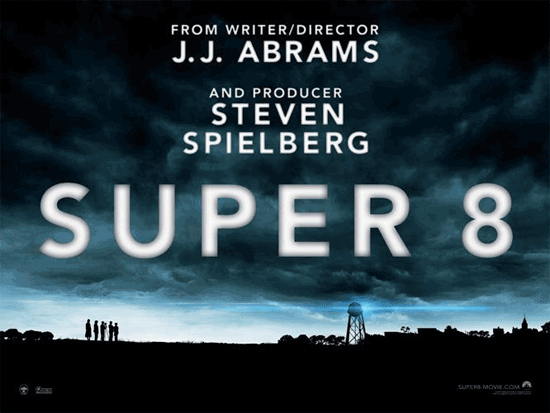 The movie Super 8 is excellent, and tells the story of a group of kids, amateur film makers in 1979 who, when filming a scene for their homemade zombie movie, witness an incredible (and mysterious) train crash, while their Super 8 camera witnesses even more. Super 8 is director J. J. Abram’s cinematic love letter to producer Steven Spielberg, and everything about it pays homage to Spielberg’s early works, especially Jaws (a small town cop trying to reassure a terrorized town), E. T. (with bike riding kids and an alien), and Close Encounters (flickering lights , the guv’ment, and haywire electronics).

It’s refreshing to see a film about junior high kids that doesn’t have them preaching about how if you just believe in yourself you can be anything you want, or resorting to juvenile humor. Everything about this film seems grounded in a certain gritty reality, and that is largely due to the amazing performances of the kids. Newcomer Joel Courtney (who plays Joe Lamb) is a revelation, and Elle Fanning counters him wonderfully. The story is about more than mysterious cargo on a train, but is about alienation, childhood, blossoming romance, imagination, and parental reconciliation.

Yet it fails to completely soar as Spielberg’s earlier works did, and I think I partly know why: John William’s music is missing, which grounded Spielberg’s films with a greater sense of awe and wonder, and a melodic hook that one is very hard pressed to find in Super 8.

Rating: Worth 6 of my 7 run-on sentences.

NOTE: I have more to say on this film, but I’ll post it in the Comments section since it contains spoilers.