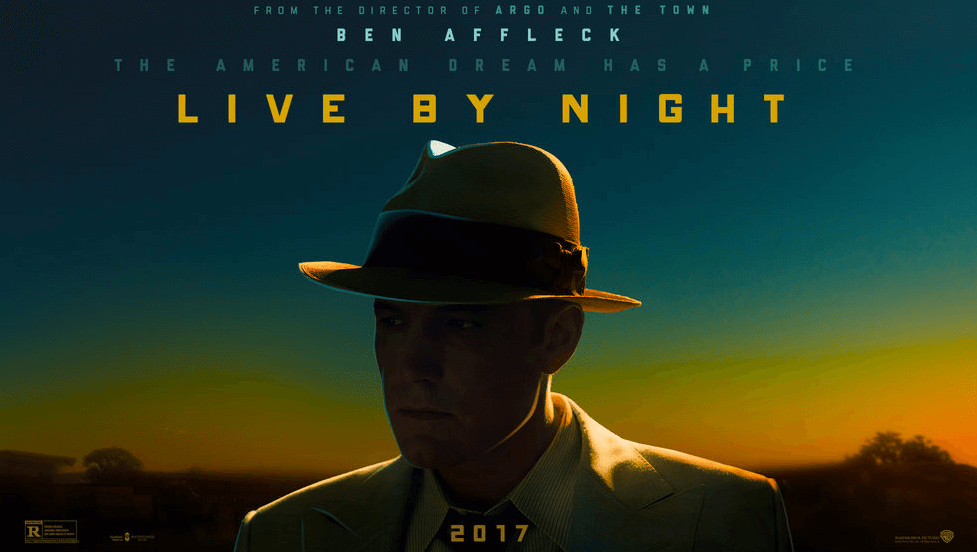 Live by Night, Ben Affleck’s latest directorial effort, is an interesting failure, though “failure” may be too harsh in that some aspects of the film are quite well done, such as the beautiful cinematography, the period atmosphere, a few very well done set pieces and many of the performances (with one notable exception that I’ll address later).

The film tells the story of Joe Coughlin (Affleck), the son of a Boston police officer, who winds up on the wrong side of the law (he prefers the term “outlaw” to that of “gangster”) through a series of circumstances too complicated to fit in a seven sentence review.

Coughlin winds up in Tampa, working for the Italian mob, initially protecting its interests in liquor smuggling but eventually attempting to expand to gambling while fighting off the Irish mobsters as well as the Ku Klux Klan and a young evangelist who wants to defeat his plans to build a casino, all while seeking revenge on the Irish mob leader who supposedly killed his former girlfriend and falling in love with the Cuban sister of his drug smuggling partner.

That previous poorly crafted sentence captures what is basically wrong with the film in that it tries to do too much and it’s all over the place with sub-plots aplenty, plot lines that trail off, and characters who pop up and suddenly disappear, though admittedly not having read Dennis Lehane’s novel on which the film is based, it is impossible to know how much of this “all over the place” plot is attributable to the novel and how much of it can be placed at the feet of Mr. Affleck (who, besides acting and directing, also is credited with the screenplay).

And to go back to my earlier comment about the acting, the weakest link is Affleck himself, who gives an extremely low-key, somnolent performance that I can only assume is intended to be gangster (I mean outlaw) cool but instead drags the film down and throws off the balance, a performance that is surprising because Affleck has directed himself before, most notably in the Oscar-winning Argo.

But despite the lackluster performance he gives, Affleck draws excellent performances out of several of his actors, particularly Elle Fanning as the young evangelist, Brendon Gleeson as Coughlin’s father and Chris Cooper as police chief Figgis, and he creates some lovely individual scenes, such as a conversation between himself and the evangelist set in a restaurant and a standoff with the Klan leader outside the partially-constructed casino.

Live by Night has some nice touches (it is lovely to look at) and is certainly not a terrible film but its rambling, scattershot storytelling and dreary central performance lead me to the conclusion that it’s only worth four out of my seven run on sentences.