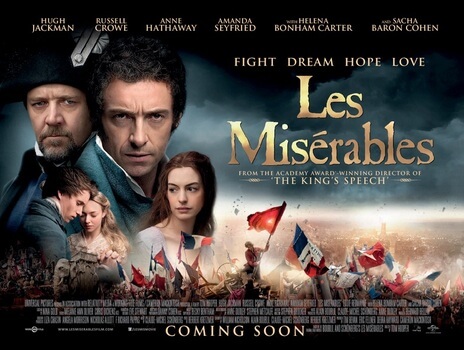 Any film adaptation of the most perfect live musical (are you picking up my biases?) is bound to somehow fall short of expectations, since perfection, cross-medium, would be nearly impossible, and this review is not a critique of the story or the musical at all, but instead, focuses on the adaptation, and assumes the reader knows the story line.

First, the acting is remarkable, and the live singing really did work, creating nuanced and powerful performances with emotional intensity and subtlety not possible on the stage, but I wonder if the need to place microphones close to the actors led to framing decisions that gave the movie a slightly claustrophobic feel, with lots of close-ups of impassioned (really, really impassioned) singing.

Eddie Redmayne is a revelation as Marius, and practically steals the show, turning what is a smallish role into one of the most gripping and memorable screen performances I’ve seen lately, showing incredible charisma, acting, and singing, and it’s an achievement shared with Anne Hathaway, who deserves every bit of praise she’s received for her gut-wrenching portrayal of Fantine.

The same cannot be said for Russell Crowe in the role of Inspector Javert, whose singing is not up to the task and whose acting is woefully absent, minimizing the foil (dramatic and theological) to the noble, grace-filled (and slightly nasally sounding) Jean Valjean (played wonderfully by Hugh Jackman), and creating one of the worst casting decisions since Pierce Brosnan in Mamma Mia. The Thénardiers (played by Helena Bonham Carter and Sacha Baron Cohen) were a let down, too, played too quietly in what should have been obnoxious, over-the-top roles which would have provided some much-needed levity to a heavy-themed story.

Director Tom Hooper did much very well, including battle scenes (the start of the battle at the General’s funeral is an improvement on the stage version), but fell short in what should have been big production numbers, making “One Day More” a series of disconnected close-ups instead of an epic joining up of multiple story lines, and weakening “Master of the House” the same way.

But nit-picks and critiques aside, it’s still an epic, stirring, tear-jerking story that soars, carried by some stunning performances and some of the best theater music ever written.