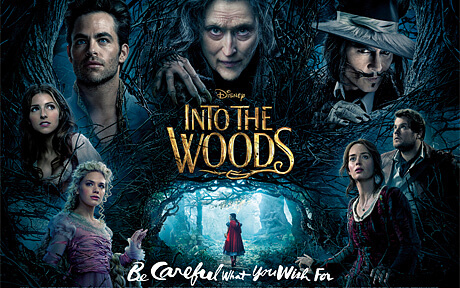 Film-making is a collaborative process, and nowhere is this more evident or enjoyable than in a film like Into the Woods, where the acting, directing, costumes, production design, cinematography, and music are all performed by artists at the top of their game.

From the opening notes of the prologue, this musical adventure into fairy tales melded and blended together dazzles with beautiful painterly images, rich sets, and performances that that were surprisingly competent. Perhaps it’s because I’ve seen too many musicals miscast with Hollywood names (I’m thinking Russell Crowe and Pierce Brosnan) that it’s refreshing to see Chris Pine (hilarious as an egotistical prince), Anna Kendrick (as Cinderella) and a show-stealing Emily Blunt (as the Baker’s Wife) demonstrate their vocal and acting chops to such an outstanding degree. Young Lilla Crawford impressed as Little Red Riding Hood, but the most riveting performance belonged to Meryl Streep (as the manic Wicked Witch), whose performance alone was worth the price of admission.

Stephen Sondheim’s music isn’t everyone’s cup of tea, and I get that. You don’t exactly leave the theater humming his complex and not too memorable tunes, but his creative genius is hard to deny. Broadway musicals don’t always make the transition to film, but Rob Marshall has proven once again that he is the master of straddling the mediums, and though not everyone will enjoy the movie as much as I did (among family and friends who have seen it, there’s a good bit of division), I’ve gotta give it a review per my tastes, not what I think everyone else’s are, and I really enjoyed it.