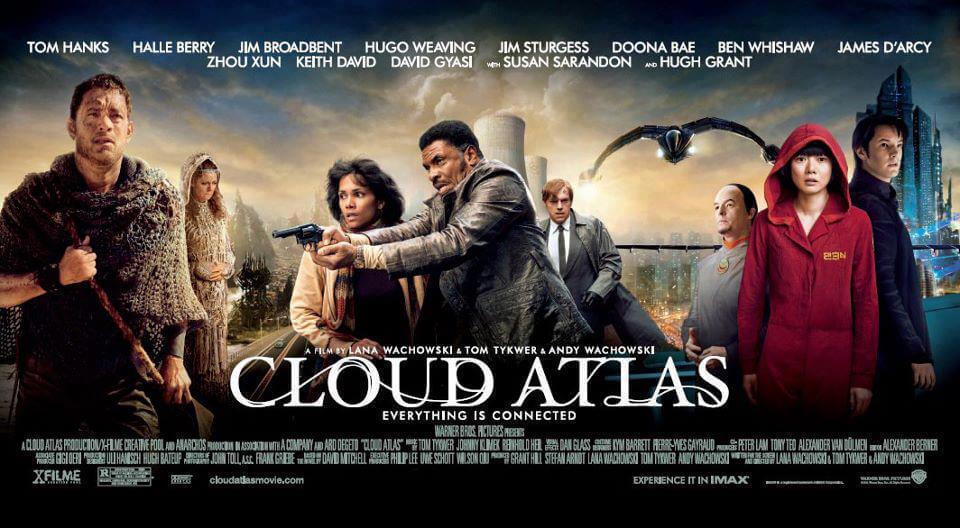 Note: In a first for me, I’m revising a review. And while both of the readers of this blog may decry such actions, it’s my blog, and I’ll do as I please. Why the revision? Because some films are better reviewed after the passage of a little bit of time. And after just a very short time, I’ve come to realize how forgettable much of Cloud Atlas is. It has kind of soured on me.  When I wrote my review of Les Misérables and realized they were only one star apart in my ratings, I also realized this was a travesty. Hence, this revised review and score. Cloud Atlas is an ambitious epic story (or rather 6 stories) that spans centuries, using the same actors to portray multiple roles (such as Tom Hanks, Halle Berry, Hugh Grant, and Jim Broadbent) across multiple stories.

It pulls out all the stops of slickly made expensive modern film making, with soaring cinematography, good performances from a seasoned cast (although you never forget that Tom Hanks is Tom Hanks, which may be no fault of him own), and stellar visual effects that fully evoke whatever the time period is, from the 1800s to far, far into the future.

Some of Cloud Atlas’s story lines, which touch on themes of slavery, freedom, hope, and love, are stronger and more compelling than others, as the directing Wachowski siblings bounce freely between them; in some way, we’re supposed to see a connectedness between people and plot lines, and we’re supposed to find something deep and thought-provoking in all of it. We even see glimpses of the Bible, as Jairus’s daughter is raised from the dead and asks for breakfast, innocents are crucified, and Satan himself (!) shows up on a mountainside to tempt a man.

Yet Cloud Atlas proves to be a little too cloudy, a little too much in need of its own atlas; it is a movie trying to be profound, when others (Tree of Life comes to mind) simply are. Though much is muddled, there are some values and morals that the film contains, and ironically in the midst of such a confounding story, the messages are hardly nuanced, and it comes off as preachy in places.

Perhaps I’m being too harsh on what really is just a fine looking film, but it seems to teeter under the weight of it’s own ambition, and failed to speak to me like I’m sure the directors wanted it to; at this Cloud Atlas, I shrugged.